Some community members (myself included) recently introduced the idea of “bridging” some % share of the total protocol fees to the DAO. Since launching on November 2021, a total of $2.7M in fees have been collected, which are currently used solely to compensate supply-side participants= LPs / Relayers.

Implementing even a small protocol fee would provide significant funding to cover general expenses within the DAO, including development costs, grant programs, foundation expenses, and more. This Protocol Fee Switch would effectively reduce potential sell-pressure on $ACX, as future DAO contributors could be paid in bluechips tokens (usdc, eth…) earned as bridge fees.

As an example here is the Revenue share of Stargate: 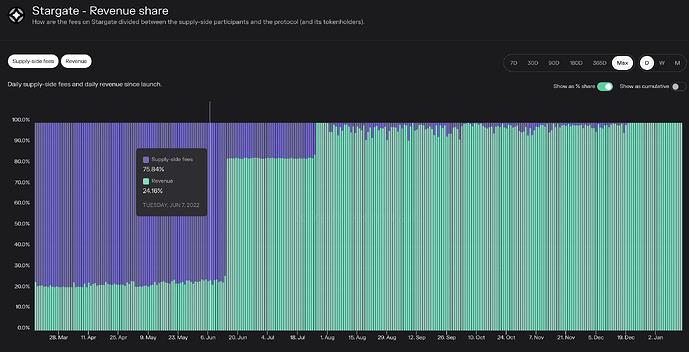 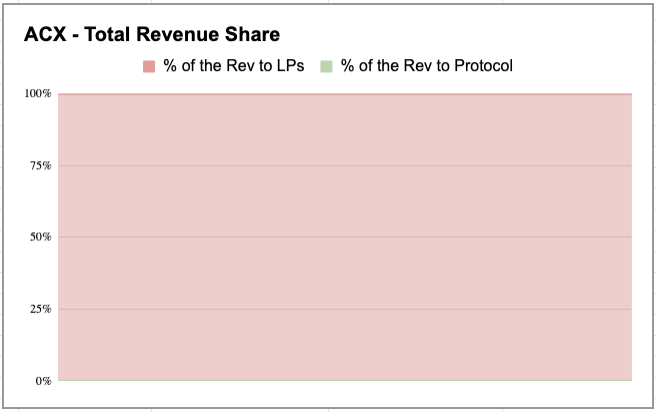 Across has been paying LPs 100% of the bridge fees since inception - the 4th of November 2021 - and 0% to the Protocol´s Treasury. I think it´s time to change that.

Across has been paying LPs 100% of the bridge fees since inception - the 4th of November 2021 - and 0% to the Protocol´s Treasury. I think it´s time to change that.

Currently there are no bridge fees. I am not for taking a % of the market makers or relayers earnings as i feel that discourages liquidity provision. APY % for LP’s is already low and as an LP if we lost any more i’d probably move my tokens elsewhere. The treasury already has plenty of money to provide for the programs you listed and i think adding a fee to the bridge is probably unnecessary. Also, Stargate has lost approximately $125 mm in TVL since changing their policy. So overall i think the treasury doesn’t necessarily need a source of income at this point to support any initiatives.

Currently there are no bridge fees.

¡Of course there are bridge fees! Everytime a user uses the Across bridge they pay a fee for the transaction.

Here is basically how it works:

I am not for taking a % of the market makers or relayers earnings as i feel that discourages liquidity provision. APY % for LP’s is already low and as an LP if we lost any more i’d probably move my tokens elsewhere

I agree it may discourage some liquidity provision and that TVL may fall 10% or 20% to $42-47.7M of TVL. But that isn´t necessarily bad! A protocol bridge should always optimize for capital efficiency. This works in a game theory way, it´s actually really fun and interesting:

-If you have a capital efficient bridge this means that you are capable of doing great amounts of volume with relatively low capital.

-This gives you the possibility to charge low fees to users (Across most of the times is the cheapest bridge that appears on aggregators), while paying out a decent yield to LPs. How?

You aggregate all of this fees that users paid to bridge, and distribute them among less capital.

-Basically, due to being capital efficient and requiring less capital the total amount of fees coming from bridge volume gets distributed among lesser capital or LPs.

The protocol switch idea kind off introduces the game theory aspect: If TVL goes down, the capital that remains inside the LPs will earn more fees and thus more apr/apy, because the same amount of fees will get distributed among lesser capital!

The only assumption we are taking here for this to be true is that the bridge is capital efficient, which makes it able to handle the same amount of volume or relatively higher quantities, and Across is designed to do that!

I quickly made a spreadsheet Protocol fee switch - Google Sheets that looks into this. If a Protocol Fee switch of 10% gets implemented and TVL goes down 10% or more, LPs that remain in the protocol will earn the same or more apr than before, because again the total amount of fees coming from bridge volume gets distributed among lesser capital or LPs. The DAO would also generate $160k (annualized) in bluechips + usdc, thus eliminating the need to sell $ACX to fund future DAO operations.

The treasury already has plenty of money to provide for the programs you listed and i think adding a fee to the bridge is probably unnecessary.

I don´t know if you are talking about the $10M investment by VCs, but that remains off-chain to fund Risk Labs operations. If you are talking about the $ACX that remains in the Treasury, this eliminates the need to pay contributors in $ACX directly and we could explore other ways like a mix of this bluechips, for example $1000 in eth + 1000 Success Tokens vested in one year.

APY % for LP’s is already low

Lastly, I think you are forgetting the fact that $ACX is currently being paid out as LM incentives on top of the estimated organic apr that LPs get. They are basically getting 2.89 to 17.85%, depending on what “pool” they are at, and how much have they been staked.

Thanks for putting this together @tumilet.eth. I see some value turning on this fee switch, but also think it may be early to take any meaningful protocol revenue for the DAO treasury.
First, this is something already built in the protocol. I’m not an engineer so don’t want to overpromise, but I believe there is effectively a parameter where we can set a percentage of fees to be paid to a specific wallet for this purpose. Of course, there is a lot more work after this happens as what gets done with these assets etc.
I do think it’s early. Similar to the strategy of a startup company we want to offer the best product at the lowest cost possible to provide the greatest user experience and gain wide adoption. Given the DAO does not need these additional funds now we likely want to ensure we have plenty of LPs to provide bridging capacity as we grow and also ensure we have the lowest price vs competitors.
However, I do think there could be some value in showing this fee switch is there and we can turn it on. This could start in showing a purpose for the ACX token and possibly add more value to it. I think it could help link the token price more to the performance of the bridge. Higher token price also helps to attract more users and LPs. So maybe there’s an argument in taking a small percentage of the revenue initially and then having the Across token holders tweak this parameter over time and assess how this impacts LPs and fees.
Overall, I think it’s a good discussion to have, but don’t have a clear conclusion.